Will the 'Mark of the Beast' Play Music in Your Head? 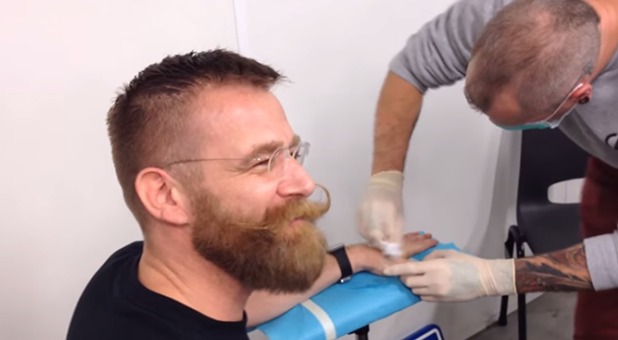 By 2040, author Stephen Witt envisions a world where people listen to music via implanted SmartChips "invoked via spoken-word commands," the Wall Street Journal reports in its article, "Is the Future of Music a Chip in Your Brain?"

While the article by Witt, author of How Music Got Free, is fictional, technologies to bring Witt's vision to fruition are now in the works.

A recent article in The Washington Post revealed that scientists at Caltech have developed an implantable chip that gave a tetraplegic man the power to drink a beverage with a robot arm.

"This is just the beginning," Arianna Eunjung Cha wrote in the article titled "Future potential of brain chip is limitless after man controls robot arm with his thoughts."

"Researchers are working on all manner of silicon-based devices that go inside the body and manipulate the body's signals to create motion. They believe these chips will not only be able to help those with paralysis one day—but also usher in a new era of robot adjuncts controlled by someone's thoughts that will be able to perform all manner of jobs from lifting dangerous objects to filing papers."

Last year, doctors performed an operation on a 22-year-old man to insert a chip into his brain connected to a port and computer programmed to decode messages from his brain.

This follows the increasing use of short-range radio frequency identification (RFID) chips.

"You can inject one under your skin, and no one will ever notice," wrote John Brandon in his foxnews.com article titled "Is there a microchip implant in your future?" "Using short-range radio frequency identification (RFID) signals, it can transmit your identity as you pass through a security checkpoint or walk into a football stadium. It can help you buy groceries at Wal-Mart. In a worst-case scenario—if you are kidnapped in a foreign country, for example—it could save your life."

As these new technologies emerge, Bible prophecy experts are asking whether these or others could one day transform into what the book of Revelation calls the "Mark of the Beast"— a mark on the right hand or forehead without which people won't be able to work, earn money or even buy the necessities of life.

Evangelist Perry Stone, the best-selling author of many Bible prophecy books, believes in a possible government plan of implanting microchips into Americans' bodies for identification purposes by 2017-18.

TruNews' Rick Wiles says the REAL ID Act passed in 2005 could be the initial step to use these new technologies. Jim Bakker, host of The Jim Bakker Show, agrees, saying the identification laws are only in their nascent stages.

all | mark of the beast | microchip | RFID