U.S. In Danger of Megadrought 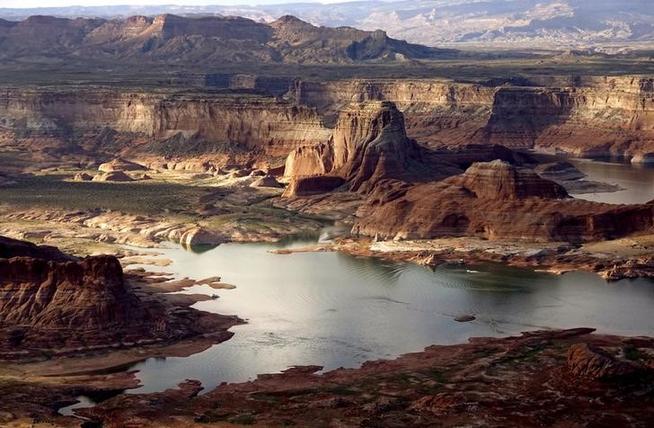 Where the Colorado River falls from the snow-capped Rocky Mountains into the arid U.S. Southwest, lies Lake Powell.

More than 500 feet (150 meters) deep in places and with narrow side canyons, the shoreline of the lake is longer than the entire West Coast of the United States. It extends upstream into Utah from Arizona's Glen Canyon Dam and provides water for Nevada, Arizona and California.

But a severe drought in recent years, combined with the tapping of the lake's water at what many consider to be an unsustainable level, has reduced its levels to only about 42 percent of its capacity, according to the U.S. space agency NASA.

The peak inflow to Lake Powell occurs in mid to late spring, as winter snow melts in the Rockies. But since 2012, snow and rainfall totals have been abnormally low as the region suffered persistent drought.

For Reuters, I traveled to the area to document with my cameras the lake as it looks today. I flew over the water, hiked around its shores and shot photos from a boat.

Navigation on the water was difficult, with lake maps showing water where in many places now there is just dry land. All around the lake, strikingly pale bands of rock have been exposed by the receding waters.

Scientists from NASA and Cornell and Columbia universities warned earlier this year that the U.S. Southwest and Central Plains regions are likely to be scorched by a decades-long "megadrought" during the second half of this century if climate change continues unabated. (reut.rs/1EnbzDL)

Forecasting that there is an 80 percent chance of an extended drought in the area between 2050 and 2099 unless aggressive steps are taken to mitigate the impacts of climate change, the researchers said their results point to a challenging - and remarkably drier - future.

The number of people living in the U.S. Southwest and Central Plains, and the volume of water they need, has increased rapidly over recent decades, the scientists said, and these trends are expected to continue for years to come.

Satellite images released by NASA in June showed dramatic changes in the northeastern reaches of the lake between 1999 and 2015. Reuters' photos brought viewers up close. Reuters