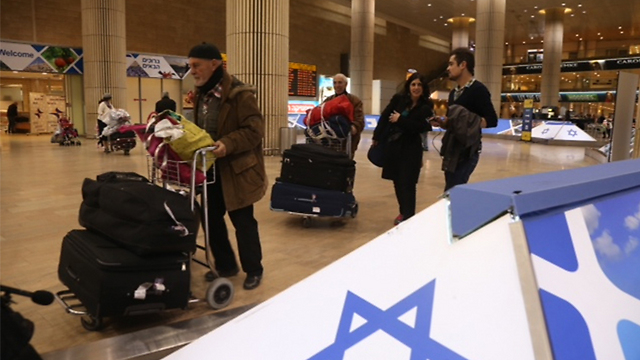 Some 400 French Jews arrive at Ben-Gurion Airport this week; more than 3,000 expected to arrive throughout the summer. Additionally, 80 French Jews on tourist visas become Israeli citizens.

Some 130 French Jews, including 46 children and two babies, landed at Ben-Gurion International Airport on Monday, marking the start of a wave of French aliyah expected over the course of the summer. Some 400 French immigrants were expected to arrive by the end of the week.

Additionally, some 80 French Jews who had been in Israel on tourist visas became Israeli citizens and received their Israeli identity cards in a ceremony hosted by the Jewish Agency for Israel at the organization's Jerusalem headquarters building on Tuesday.


In light of the heinous terror attack in France this past weekend and as the wave of anti-Semitism continues, Minister of Aliyah and Immigrant Absorption Ze'ev Elkin called on French Jews to immigrate to Israel.

"We welcome the immigrants who arrived in Israel last night. Every plane that arrives in Israel strengthens Israel and strengthens the French Jews who have come home," said Elkin. "As anti-Semitism increases, terrorism surges, and sick ISIS operatives carry out murders in broad daylight, Jews around the world know that they have a country and a family to return to.


"We welcome you with open arms. According to all forecasts, this is just the beginning of an unprecedented wave of Aliyah from France, and I am very pleased that the Ministry of Aliyah and Immigrant Absorption offices at Ben-Gurion Airport will be working overtime this summer."


"Over the past two years, The Jewish Agency for Israel has increased its activities in Europe in response to European Jews' growing interest in aliyah," said Jewish Agency Chairman Natan Sharansky, who attended Tuesday's ceremony and presented new French Jewish immigrants with their Israeli identity cards.

"We are seeing an unprecedented wave of aliyah from European countries, which indicates not only how Europe is becoming an uncomfortable place for Jews, but –even more importantly – the extent to which Israel is becoming a magnet for Jews interested in a meaningful Jewish life, in freedom, personal security, and a sense of belonging to a country that is integral to the future of the Jewish people." YNettNews