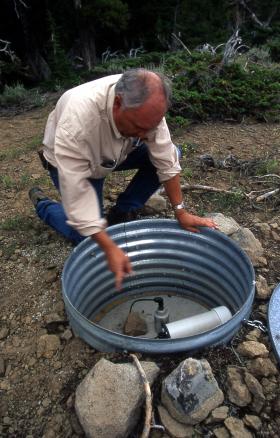 Millions of people visit Yellowstone each year to see it’s geysers, fumaroles, hot springs, and mud pots. It’s the largest concentration of thermal features in the world. The park sits on top of the world’s largest active volcano. Called the Super Volcano. It’s most recent eruption was more than 600,000 years ago. All that remains is the top, or caldera.

When you come into the Park they’ll give you a map and it has an overlay of the caldera. It’s huge.

Underneath the old caldera is a moving plume of magma. Dr. Robert Smith has been studying Yellowstone’s earthquakes and it’s Super volcanos for almost sixty years.

“Anytime you come to Yellowstone you have to drive uphill, no matter which direction you come. And the reason is this giant plume of magma, is very hot, therefore it’s ebullient, low density and it just lifts the surface up.”

How impressive is the super volcano? Smith says one ancient eruption killed rhinos in what is now Nebraska.

“And these giant eruptions in Yellowstone, super volcanoes if you wish, probably last many many months, maybe even years.”

Smith and his students use seismographs to map the magma pool underneath Yellowstone’s volcano, and satellites to determine how much the land swells, or bulges. They found that the magma is much larger than they originally believed.

As he sits on his porch in Moose, underneath the towering beauty of the Grand Tetons, Smith explains just how big the magma body is.

The title of the paper Smith published with his student Jamie Farrel said “the Yellowstone crystal magma reservoir extends well beyond the Yellowstone Caldera.” Smith said the fact that it’s larger than the caldera is significant.

“So if it’s past the caldera system, it’s beyond the young volcanic’s. So this feature is leading, if you wish, the motion of the North American plates coming across.”

Smith said the new information helps scientists predict where the next super eruption will be.

“And eventually if we have volcanism beginning again, I would predict we’ll have it in the northeast side of Yellowstone because that’s where the shallowest magma is at Mirror Plateau.”

“It’s the biggest earthquake in 30 years.”

Smith is the expert on Yellowstone’s earthquakes, which are numerous and widespread.

“I contend that when the Yellowstone caldera goes up and down or when the magma influx occurs that the stresses of that magma chamber cause stresses on the Teton Fault to eventually rupture.”

And, Smith says the Teton Fault movement could trigger the Yellowstone volcano.

So, how likely is it that the big one will blow soon?

“If we were to have another big eruption, it would affect a large area, on the order of several states.  But, as I said, that probability is very, very, very, very small. In my calculations it’s point zero, zero, zero, one percent.” WPM