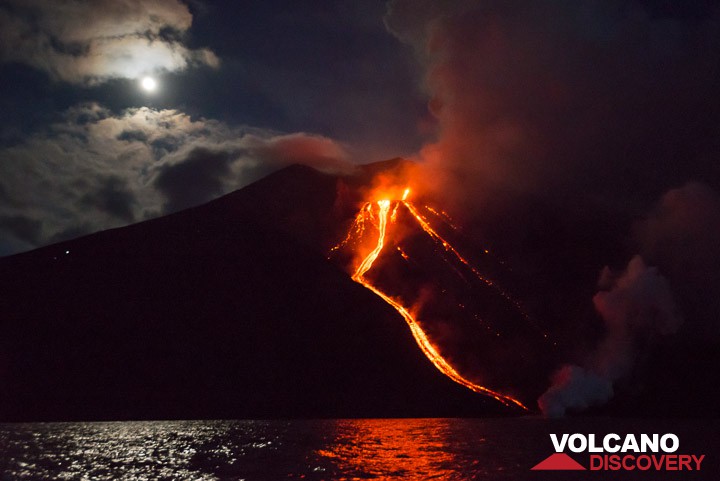 ITALY – Stromboli volcano lava eruption: The lava effusion continues at decreasing, but still considerable rate. When seen yesterday evening, only one channel, 5-10 m wide was still entering the sea at 10 m wide front, while there had been up to 7 branches reaching the shore in the area west of or partially covering the 2007 lava delta. Small explosions were occurring at the sea entry. Several lava branches were still weakly active on the upper Sciara, causing many incandescent rock falls.
It appears that a part of the NE flank of the NE crater has collapsed and that the new effusive vent is located at its northern base, at approx. 700 m elevation. Thus, being lower than the summit vents, it is able to effectively drain the upper part of the volcano’s plumbing system, which explains why no explosions were observed at the summit craters.

Ecuador’s volcano spews lava: The 5,023-meter (16,575-foot) volcano Tungurahua, in Central Ecuador, spewed lava and incandescent rocks from its crater in its latest activity on Thursday. Tungurahua has been shooting plumes of ash into the sky to a distance of upto three kilometers (1.8 miles) since the beginning of the week. Civil defense officials have issued an “orange warning,” – involving voluntary evacuation – to villagers living near Tungurahua’s flanks. The Tungurahua volcano has been active since 1999. In 2006, it spewed large clouds of ash down its slopes, killing four people and leaving two missing.  EP