Large volcanic eruptions would have devastating impact on planet 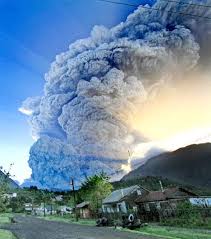 A drop in crop yields in the UK and many other grain producing countries, as a result of extreme weather, has increased prices worldwide, and may cause serious hardship. But these consequences would be dwarfed by the catastrophe that a volcano could unleash on a heavily populated planet. Evidence unearthed in London’s Spitalfields of mass graves, dated to 1258, shows that between 20 and 40 bodies were buried at once in a series of pits in the cemetery. There were both sexes, with adults and children together. They are believed to be famine victims because they had no battle injuries and it was a century before the Black Death. The same year the monk Matthew Paris of St Albans recorded “unendurable cold” in the winter that suspended all cultivation and killed calves. In June spring had still not arrived and wheat was so scarce that “a very large number of poor people died.” Contemporary chroniclers in other continents also record appalling weather and mass starvation. Geologists have found that over both hemispheres, as far south as Antarctica, there is a thick layer of volcanic ash from the same period. The sheer quantity of aerosols projected into the atmosphere would have blotted out the sun and wiped out crops. The volcano responsible for this devastation and mass starvation is not known, but 850 years is a short gap in geological time. Somewhere this monster is dormant and could erupt again.  EP