Yoav Krief remembers the day he knew it was time to move to Israel: January 9, 2015.

It was a Friday. Four Jews had just been killed in the Hyper Cacher, a kosher supermarket in Paris, two days after the Charlie Hebdo attack. One of them was Krief's friend. 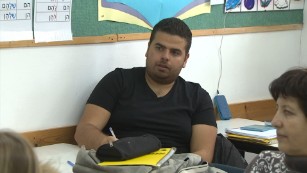 Krief decided to leave France after a friend was killed in a terror attack.

Krief, a French Jew who had just finished high school, moved to Israel with his family six months later, as part of the largest migration of Jews from Western Europe to Israel since the modern state of Israel was created.

Nearly 8,000 French Jews moved to Israel in the year following the Charlie Hebdo attack, according to the Jewish Agency, which handles Jewish immigration, or aliyah, to Israel.

The number of French Jews moving to Israel has doubled -- and doubled again -- in the past five years.

Britain has the second-highest Jewish emigration from Western Europe, but the scale is much smaller. According to the Jewish Agency, 774 British Jews moved to Israel in 2015, less than one-tenth the number of French Jews.

'Difficult to live as a Jew in France'

Many French Jews settle in Ashdod, a city in southern Israel known for its large French population.

You are as likely to hear French on the streets as you are Hebrew, especially in one of the city's many French cafés.

"It's great for me here, much better than France," says Charly Dahan, a musician who moved to Israel from Paris two years ago.

"This is the first time in my life that I am relaxed. In France, I also felt good, but the situation and the current problems... it's very difficult to live as a Jew in France," he adds.

The Jewish Agency says violence is part -- but not all -- of the reason for French immigration.

"While high-profile attacks such as those at the Jewish school in Toulouse in 2012, the Jewish museum in Brussels in 2014, and the kosher supermarket in Paris and the synagogue in Copenhagen last year have certainly been the most vivid instances of violence targeting French and European Jews, the French Jewish community has been living with a deep sense of insecurity for quite some time," says Avi Mayer, spokesman for the Jewish Agency.

Israel's Jewish leaders have always proclaimed that the country will always offer a home to Jews from anywhere in the world.

But what of the places these newcomers have left behind?

French Prime Minister Manuel Valls recently expressed the fear that an exodus of Jews would change the country for the worse.

"Without the Jews, France is no longer France. It's the oldest community. They have been French citizens since the French revolution," he told CNN's Christiane Amanpour.

Fear of being seen as Jewish

But when the European Union studied the prevalence of anti-Semitism in 2013, it found that 74% of Jews in France avoid openly identifying themselves as Jewish at least some of the time, and more than a quarter of French Jews always do.

Dov Cohen, a French Jew who left Marseille for Ashdod last summer, says he never wore his religious skullcap, or kippa, in public.

"You have to watch out," Cohen says about his life in France. "You have to protect the children because of fights in the metro and on the buses. This pushed us to decide to make aliyah," he says.