Dozens of members of an Indian tribe said to be lost descendants of ancient Israelites have emigrated to Israel after the government lifted a visa ban.

Some 1,700 of the 7,200-strong Bnei Menashe already arrived nearly a decade ago after a chief rabbi recognised the community as a lost tribe in 2005. 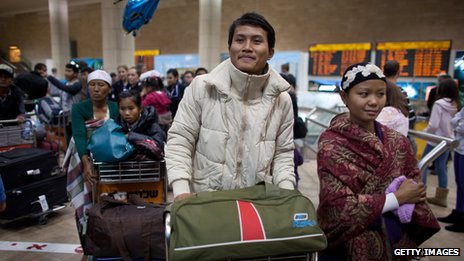 Some critics have questioned the authenticity of the tribe's claims.

The community says it is one of the lost 10 tribes of Israel who were exiled when Assyrians invaded the northern kingdom of Israel in the 8th Century BC.

According to its oral tradition, the tribe travelled through Persia, Afghanistan, Tibet, China and on to India, where it eventually settled in the north-eastern states of Manipur and Mizoram.
'Never forgotten'

Around 50 people landed in the city of Tel Aviv on Monday.

Eyewitnesses said there were emotional scenes at Ben Gurion airport as the newcomers were greeted by relatives who had moved to Israel during the first wave of immigration.

"The members of this tribe have never forgotten where they came from and we are excited to be able to help them come back," he told AFP news agency.

But some critics say the Bnei Menashe's link to Judaism are "historically untenable". They accuse the community of using their status to escape poverty India.

The announcement led to a wave of immigration to the "Promised Land", where members were formally converted to Orthodox Judaism.

The flow stopped in 2007, however, when the government rescinded visa rights to the Bnei Menashe.

Israel's decision to reverse the policy is expected to pave the way for all remaining members to migrate. BBC