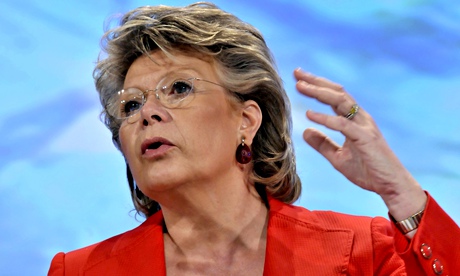 A celebrated call by Winston Churchill for the creation of a "United States of Europe" was revived on Monday by a leading member of the European commission who said the 18 eurozone countries should form a full fiscal and political union.

Viviane Reding, a vice-president of the commission, told Cambridge University's law faculty that "bold reforms" were needed to avoid tensions across Europe as new governance arrangements were introduced to stabilise the single currency.

Delivering the Mackenzie Stuart Lecture, named after the first British judge to serve as president of the European court of justice, the European justice commissioner endorsed Churchill's view in a famous speech in Zurich in 1946 that Britain should remain apart from the United States of Europe.

Reding said: "There is a strong case for a true fiscal and ultimately political union. In my personal view, the eurozone should become the United States of Europe. Like Winston Churchill, I believe that the UK will not be part of this, but it should remain a close ally with the federated eurozone, with which it would continue to share a common market, a common trade policy and hopefully a common security agenda."

Foreign Office sources described Reding's speech as "a mixed bag of a lecture from an unrepentant federalist". But the Foreign Office sources welcomed the acknowledgment by a senior European commission figure of the extent of reforms needed to create new governance arrangements for the eurozone that would require treaty change.

Reding did not touch explicitly on treaty change. But José Manuel Barroso, the president of the European commission, did call for major treaty change in his 2012 state of the union address in which he called for "a federation of nation states".

David Cameron insists he will be able to table major reforms to the EU if he wins the 2015 general election, on the grounds that treaty change to introduce new eurozone governance arrangements, which would require the UK's agreement, will be inevitable. The prime minister has pledged to hold an in/out referendum – following a renegotiation of Britain's membership terms – by the end of 2017.

The vice president also took a swipe at Britain by saying that British politicians should focus on improving educational standards, rather than blaming "too many foreigners" for social problems.

In the speech in Cambridge Reding said: "Politicians also need to work on the quality of education and welfare, so that people in this country can find employment and enjoy reasonable social standards. Simply trying to project all problems on the supposed issue of too many foreigners moving into the country is certainly not the answer."

The commissioner from Luxembourg hopes to succeed Barroso as the next president of the European commission. This is seen as highly unlikely because she is from Luxembourg, whose former prime minister, Jean Claude-Juncker, is a more likely candidate.

Reding also acknowledged one of the prime minister's central demands – that the 10 EU members outside the eurozone, led by Britain, will need guarantees to ensure the single market is protected. Reding said: "The eurozone members must acknowledge the need to find solutions where their interests are different from those of the member states who do not share the single currency. Otherwise, they risk pushing the UK out of the EU before it decides of its own accord, as it might, to jump."

The vice president added: "For the eurozone members, the ultimate goal is to ensure the stability of the euro … While a stable currency union is obviously also essential for member states outside the eurozone, their main interest may lie elsewhere – for instance in preserving the single market for all 28 EU countries and their unimpeded access to it. This creates strong tensions. And these tensions are likely to grow as the process of stronger integration of the eurozone advances further. We have made great strides, but more bold reforms will be needed."

A Foreign Office source said: "While commissioner Reding recognises the needs of euro-outs and the global race, there's no understanding that the EU's deep flaws need putting right, for example leaving more issues to national governments and the lack of democratic accountability. Nothing's more damaging to the EU than failing to accept that it needs to deal with problems like free movement abuse.

"Only a tiny minority across Europe back her call for a United States of Europe but she's entitled to her view, however few share it. The prime minister, however, is confronting those problems by seeking to make the EU work better for all and giving the British people a choice on the EU: in or out."

"The structure of the United States of Europe, if well and truly built, will be such as to make the material strength of a single state less important. Small nations will count as much as large ones and gain their honour by their contribution to the common cause...Great Britain, the British Commonwealth of Nations, mighty America, and I trust Soviet Russia - for then indeed all would be well - must be the friends and sponsors of the new Europe and must champion its right to live and shine."  The Guardian