Did Pope Francis Really Just Take a Big Step Toward One World Religion? 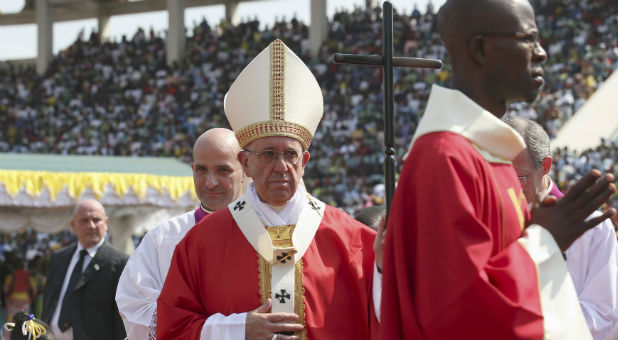 Jennifer LeClair
Over the summer, I penned a column about why so many people think Pope Francis is the Antichrist. It caused quite a stir.

So why do so many people think—or at least ponder—that the Latin American pontiff is ushering in a one world religion or New World Order? There are many reasons, some of which I listed in my last article, not the least of which is his apparent call for a New World Order on more than one occasion.

Now, a Reuters report is adding more fuel to that fire. Taking his message of peace to the Central Africa Republic, Pope Francis declared what some end-time watchers are calling a step toward a "one world religion."

"Christians and Muslims are brothers and sisters. Those who claim to believe in God must also be men and women of peace," Reuters reports the pontiff as saying.

Francis then appealed for "an end to every act which, from whatever side, disfigures the face of God and whose ultimate aim is to defend particular interests by any and all means. ... Together, we must say no to hatred, to revenge and to violence, particularly that violence which is perpetrated in the name of a religion or of God Himself."


Certainly, we are all God's children, which makes us all brothers and sisters to some extent. But does his statement, as some suggest, mean that Francis has embraced Chrislam? Is he covertly laying the foundation for a one world religion? Is he intentionally planting seeds that will pave the way for a New World Order? Could he be working with the United Nations to introduce a one world economic system?

"Many Christians have been sitting back and waiting for one giant 'event' to happen, but the truth is that small steps toward a one world government, a one world economy and a one world religion are happening almost constantly now," Michael Snyder, founder of The Economic Collapse Blog, told Charisma News. "The apostle John warned that these things would happen nearly 2,000 years ago, and now they are playing out right in front of our eyes. When will people finally start to wake up?"

There's plenty of speculation about one currency, one government, one religion—but is Pope Francis really the False Prophet paving the way for all of this and the Antichrist to boot? Could the socialistic pontiff who has worked so hard to reconcile with Pentecostals have ulterior motives? Is he really the last pope?

I suppose only God has all those answers. But the problem with some of end times conspiracy philosophies is that they don't leave much room for God to be God. I speak with many legitimate prophetic voices, and I haven't heard any of them mention a word from God about the pope in these regards, though it is clear from Scripture that there will be an economic collapse, a False Prophet, an Antichrist rising and more.

Could we all be missing it? Yes, of course. Anyone can miss it. Do I agree with the pope's religion? No. Do I agree with his politics? No. But do I believe he's the Antichrist or the False Prophet or that he's got a diabolical plan to destroy America? No. And even if I'm wrong, I'd rather be pressing into prayer and intercession—and to evangelism and equipping—than hyper-focusing on what the devil might do next. And if I'm wrong, we're going to need the one true God's intervention more than we think. Charisma