A third of Ecuador’s provinces covered with volcanic ash 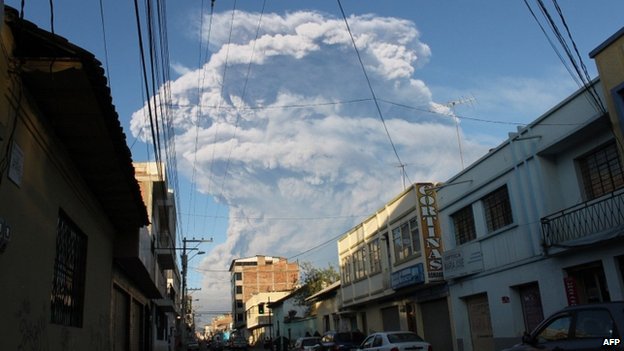 ECUADOR – A cloud of ash that climbed more than 4 km from the Tungurahua volcano Monday has affected a third of Ecuador’s provinces and forced the suspension of classes at some schools after temporarily closing a regional airport. A series of 10 powerful cannonlike blasts shook the 5,023-meter volcano Sunday night and could be heard for kilometers. Tungurahua is roughly 150 km south of Quito. Fernanda Naranjo of Ecuador’s geophysics institute said there have been no pyroclastic flows — fast-moving, superhot fluidized masses of rock fragments and gases — since Saturday. -Japan Times
New activity at Etna: After a short pause with likely no (or almost no) eruptive activity during 1-2 Feb, the volcano started renewed lava effusion from the fissure vent at the eastern foot of the New SE crater yesterday, followed by the onset of weak explosive activity(ash emissions) from the New SE crater this afternoon. So far, this activity has been very weak and the lava flow progressed only a few 100 m. The tremor signal is low and doesn’t show a clear trend at the moment.  EP